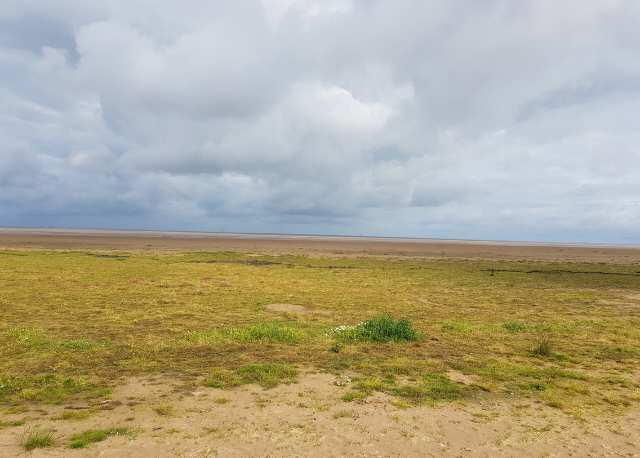 Wirral Council has completed spraying of Hoylake beach to rid it of spartina grass – amid a growing debate over how and whether it should be treated at all.

The work was carried out after the Friends of Hoylake and West Kirby Beaches organised a public meeting at Melrose Hall about the issue.

The group say the meeting with councillors and local authority officials was attended by over 100 people, with the vast majority in favour of removing the grass.

But there are concerns from some about the treatment used – a chemical weedkiller called ‘glyphosate’ – which necessitates warning notices instructing people not to touch the sprayed vegetation until after the end of the month.

Opinion is divided on the Friends’ Facebook page, and Hoylake resident Jade Waddington is among those calling for the beach to be left as it is.

She said: “Every summer we get some wild plants, flowers and grasses growing on the beach. We’ve seen foragers gathering samphire and botanicals to flavour their own gins from this greenery.  I take my little girl and our dogs there every day for a walk and it’s beautiful.

“Over the last few months the wild plants have increased, apparently due to the drainage issue on the beach, but it doesn’t cause a problem, other than some people saying it looks ‘untidy’. Given that it’s a site of special scientific interest with mudflats and not really a buckets and spades beach, I don’t see the problem with leaving it to nature.

“I’d certainly rather that than have it sprayed with carcinogenic chemicals which have been banned by many councils. Wirral council themselves said they didn’t want to use it anymore, but seem to have backtracked.

“The options seem to be a beach with wild plants and flowers, where we can walk happily, or a beach covered in dying plants sprayed with dangerous pesticides. Can’t we just leave nature to it?”

Although Wirral Council is currently trialling the use of alternatives to glysophate, such as hot foam, with a view to “phasing out the use of glysophate as soon as possible”, it says this is “not at the expense of treating weeds wherever and whenever needed”.

Its use is supported by the Friends of Hoylake and West Kirby Beaches, who argue it is the only effective treatment for spartina grass, and that it is widely used by cereal crop farmers and gardeners. They say that digging out the grass does not work because it has extensive roots and grows back quickly.

Miles Meredith Jones from the group said the treatment is approved by Natural England, but needs to take place earlier in the year to be effective.

He said: “There is a body of opinion in Hoylake & West Kirby that supports allowing nature to take over the beaches and in public areas. Humans have always nurtured wildlife but contained it for the good of populations. It is undesirable to create stagnant water with the prospect of insect and pests which spread disease.

“In addition, Hoylake and West Kirby beaches are important amenities, attracting visitors from all over Merseyside and further afield. If the beaches were to grass over, our group thinks there will be economic consequences for the two towns.”

The Friends of Hoylake and West Kirby Beaches say Wirral Council has also agreed to investigate leaking drains which are believed to be feeding the growth of meadow grass on the beach.

The developer of The Beacon in Hoylake has given an update.

The developer of the Beacon Arts Village in Hoylake has revealed the majority of restoration, refurbishment and mode...