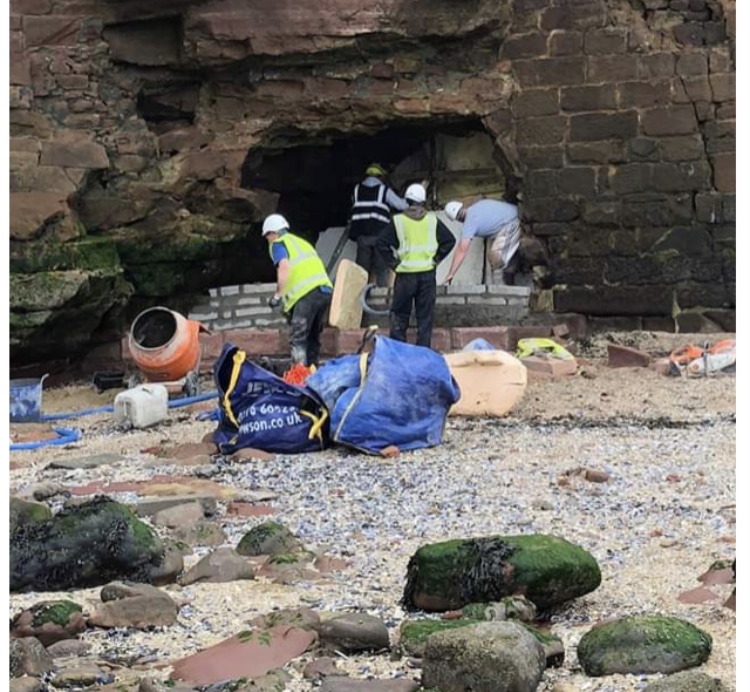 Wirral Council has been hit with a £12k bill by a court for not having a licence to carry out work which led to a blaze at Hilbre Island.

At Liverpool Magistrates Court, it pleaded guilty to carrying out an activity other than in accordance with a marine licence granted by the Marine Management Organisation.

The hearing was told the offence took place in August 2019 at the nature reserve.

Following a partial cliff collapse in 2016, the local authority commissioned a report to investigate the stability of the area. The report set out several options to prevent further collapsing and the council chose the option of infilling a cave in the cliffside. The report noted at this time that a marine licence would be required for these works.

On 24 July 2019 contractors, under the instruction of Wirral Council, began a construction project to shore-up the cave. The project involved the infilling of the cave with a combination of polyurethane slabs and polyurethane expanding foam.

On 17 August 2019, a storm hit the island. The resultant action of the sea washed parts of the foam away over several days and a quantity of this entered the marine environment.
On 23 August 2019 the contractors reapplied expanding foam. The foam then caught fire and burned for three days until the entire contents of the cave filling, made up of polyurethane slabs and foam, were burnt out. Some of it entered the marine environment resulting in a clean-up by the council, the contractors and local volunteers.

Neither the council or the contractors had applied to the MMO for a marine licence, contrary to Section 65 of the Marine and Coastal Access Act 2009. The foam used was not designated safe to use in the marine environment.

In sentencing, District Judge Clark found the actions of the Council to have been negligent.

A representative from the council pleaded guilty to the charge. They were fined £8,000, ordered to pay £3,894.22 in costs and a £150 victim surcharge.
The District Judge gave the council credit for an early guilty plea, noted it had been cooperative with the MMO’s investigation, had taken steps to rectify the damage that had been caused and said he recognised imposing a larger fine would negatively impact the service the Council provides for the public.

“In cases like these, MMO will always take proportionate and appropriate action, including prosecution, to ensure the marine environment is protected.”

Back in 2019, Wirral Council apologised for the fire but said the use of the foam to strengthen the cliff was a “well-intentioned” idea that went “badly wrong”.