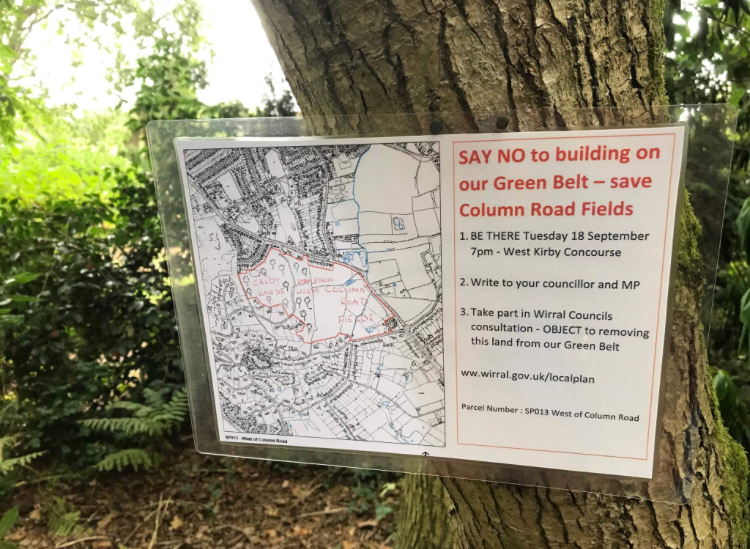 As Wirral Council’s consultation over its draft local plan draws to a close, Wirral West MP Margaret Greenwood has made an eleventh hour intervention and called on the local authority not to include Green Belt land in its proposals.

A number of local sites, including Column Road Fields by Caldy Roundabout (excluding Stapeldon Wood), and land to the west of Meols Drive in Hoylake (not including Royal Liverpool Golf Course), are being reviewed.

The council says this is because it does not have enough ‘brownfield’ land to meet the target of 12,045 homes, which the Government’s methodology estimates the borough needs over the next 15 years.

However, there is a vigorous debate over the numbers, with the local authority arguing recently that the target should be slashed to 7,000 following the publication of new population growth forecasts by the Office of National Statistics.

Wirral Council leader, Cllr Phil Davies, announced in September he was writing to ministers urging them to take the new calculations into account.

He said at the time: “We have argued that the original figures were too high and were leading to a miscalculation which threatened our Green Belt. Indeed, I wrote to the minister advocating that we should not have to slavishly follow the Government’s national formula – and we have been proved right.

“We now need to review what this means for our Local Plan and we will be writing to Government ministers to reaffirm our commitment to developing a robust Local Plan but urging them to take these new calculations into account so we can protect our Green Belt.”

Now, on the eve of the close of the consultation, Margaret Greenwood has stepped in to the debate and called for previously developed land – known as brownfield – to be used for all housing development in Wirral West.

She said: “I believe it is vitally important to protect the green belt for the quality of life it brings. The natural world is immensely important for our wellbeing and to mitigate the impact of climate change.

“It is important too that we build more homes, but these homes should be on brownfield sites.

“I have been inundated with correspondence from constituents who are clear that they do not want to see homes built on our green belt. I share their views.”

It is her second intervention recently on the issue of green space in her constituency – back in August she called for the council to drop its plans for a golf resort in Hoylake, claiming that concerns raised with her by 500 constituents represented a “clear message that public opinion is saying ‘no’ to these plans”.

Around 1,500 people have attended public meetings about the Local Plan and the consultation ends at 5pm on Friday 26 October.