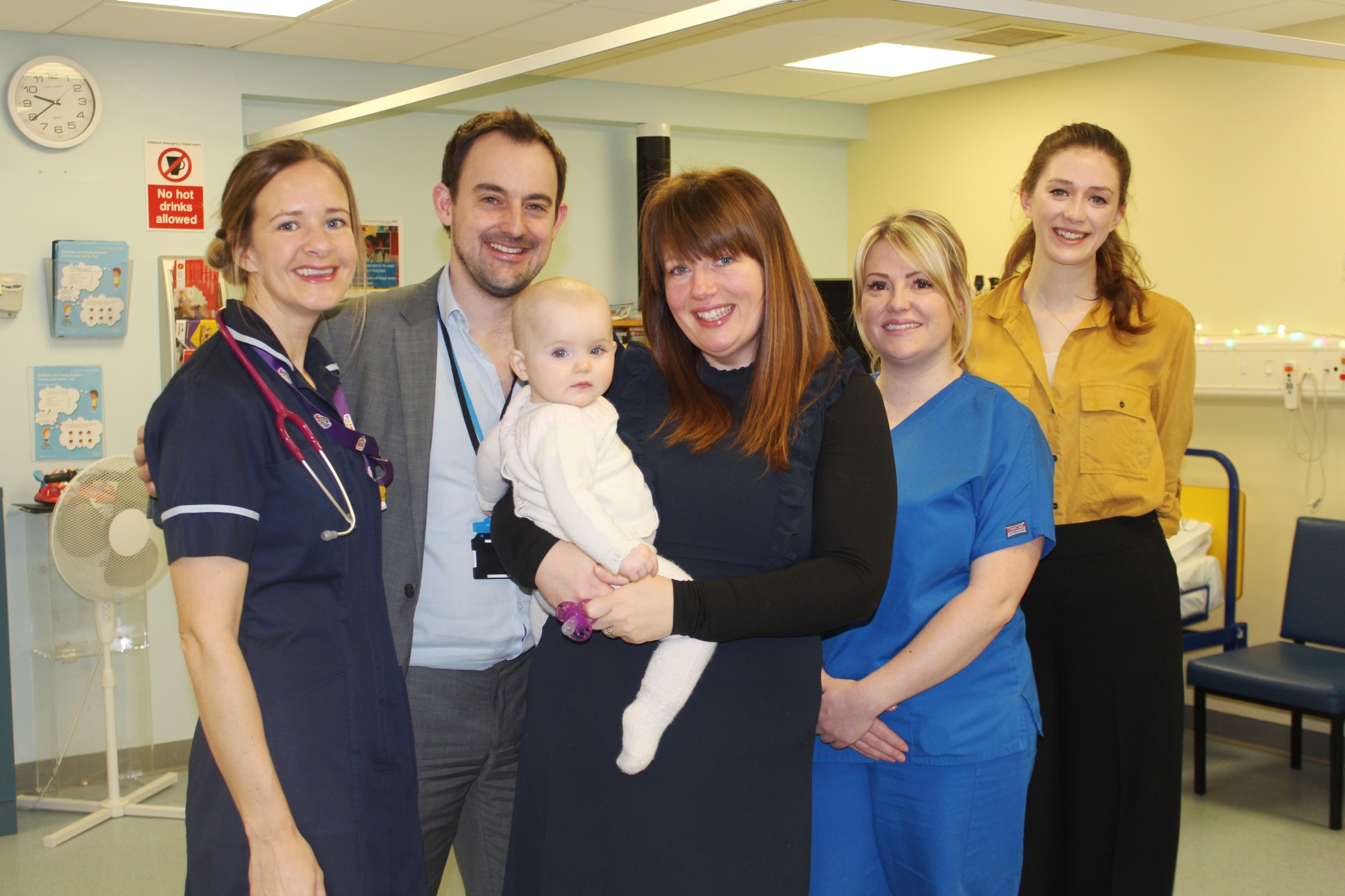 The West Kirby parents of a baby who was rushed to hospital with life-threatening illnesses have paid tribute to the NHS staff who saved their daughter’s life.

Louise and David Wood have been reunited with doctors and nurses from Arrowe Park Hospital who helped their baby overcome a severe infection just in time to celebrate her christening day. They returned to share their story with its Board of Directors, highlighting the outstanding care that they received.

Although nine-month old Clara had been under the weather, her symptoms were initially no different to those normally associated with babies’ coughs and colds. However one morning Clara seemed very lethargic and after sleeping for longer than usual, started to make an unfamiliar grunting sound.

Mum, Louise explained: “It was a week before Clara’s christening on a Sunday morning and I heard her coughing so went to check on her. She was very sleepy and disinterested and didn’t look right. I noticed she was making a strange noise and started to get worried.

“I called NHS 111 and explained that she’d developed new symptoms and deteriorated. The operator immediately called an ambulance and when paramedics arrived I could tell that they were concerned. The skin on Clara’s legs had become mottled and her lower legs felt freezing cold. When they took a blood sample I was shocked that she didn’t react to the needle.”

Clara was rushed to Arrowe Park Hospital where urgent tests confirmed that she was suffering from a form of pneumonia and sepsis. Louise was terrified that she may lose her little girl.

She said: “When her diagnosis was confirmed, part of me thought she could die but I knew she was in the best place. The call operator, paramedics and hospital team all acted very quickly so she had already started treatment. I was beside myself with fear but went into coping mode and stayed strong for Clara.

“When my husband arrived I broke down and we had some very frank conversations. Clara had become very poorly very quickly and there was no doubt that we had done the right thing in seeking medical help. It was a waiting game to see if she would respond to treatment and at one point she was on 80% oxygen.

“It was such a relief when she started to improve. Words can’t express how grateful my husband and I are for the care that Clara received and how well we were looked after. I can only imagine how busy everyone is but it’s important that those who helped us realise the amazing impact they’ve had on our family.”

Commenting on their emotional reunion with hospital staff, dad David said: “How can I even begin to say thank you for saving my daughter’s life? It is quite overwhelming to see them again but also lovely that we can say thank you in person. They didn’t just do their jobs but went well above and beyond.”

Hospital Chief Executive, Janelle Holmes, welcomed the family to the hospital to share their story. She said: “I can fully appreciate and understand the anxiety, worry and concern that Louise and David must have been going through, and am so pleased that they, as a family, were so well looked after. Their thanks is very much appreciated and means a lot to everyone involved with their care.”

Despite the seriousness of her illness, little Clara continued to make a good recovery and was discharged from hospital after several days. She has suffered no ongoing health issues and was well enough just in time to enjoy her christening, which was made even more poignant by the family’s ordeal.

Louise added: “It was a very emotional day that we thought we’d have to cancel. We said a special prayer for NHS staff and have nothing but thanks and heartfelt gratitude for the amazing care we received. I’d urge all parents to always trust their instincts. We are so lucky.”

What is sepsis?
Sepsis can be triggered by an infection in any part of the body. The most common sites of infection leading to sepsis are the lungs, urinary tract, tummy (abdomen) and pelvis. Without quick treatment, sepsis can lead to multiple organ failure and death. More information including symptoms can be found here

What is pneumonia?
Pneumonia is swelling (inflammation) of the tissue in one or both lungs. It’s usually caused by a bacterial infection. At the end of the breathing tubes in your lungs are clusters of tiny air sacs. If you have pneumonia, these tiny sacs become inflamed and fill up with fluid. The symptoms of pneumonia can develop suddenly over 24 to 48 hours, or they may come on more slowly over several days. More information can be found here

The crew from @HoylakeRNLI were called into action during a fundraising car wash.

Lifeboat crews in Hoylake had to abandon a car wash fundraiser to rescue a group of paddleboarders who had been swept out to sea.

An independent planning inspector has backed Wirral Council’s decision to throw out a proposal from @BlueoakEstates for apartments at a site overlooking Red Rocks in Hoylake. Read the story in full on our website.

An independent planning inspector has turned down an appeal by Blueoak Estates against a council decision to reject ...

The Wilson Trophy is back this weekend after a two year break due to the pandemic.
@Westkirbysc is hosting the 73rd Blueoak Wilson Trophy from Friday 6 May until Sunday 8 May.
The event is widely regarded as the premier team racing event in the world
@WilsonTrophy #wildontrophy

We've arrested 3 males following a burglary in #WestKirby on 1/05. We're now appealing for anyone who recognises these bikes or with info to come forward . More 👉 https://orlo.uk/UomOy