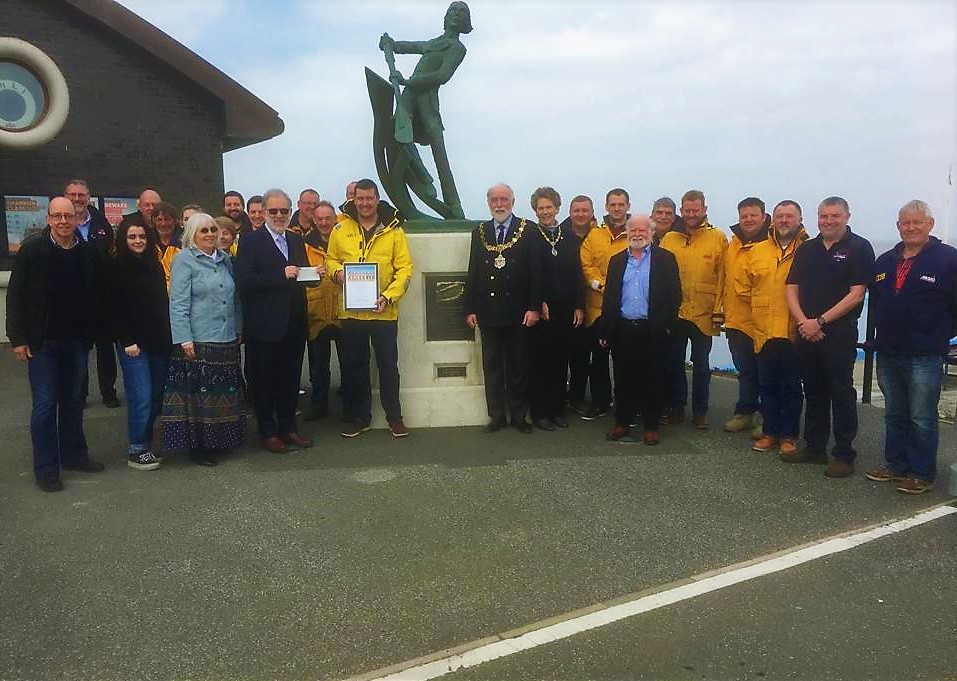 The writer, cast and crew of a musical drama based on the story of a historic local maritime disaster have presented Hoylake RNLI lifeboat station with the proceeds from their performance.

The musical, “Lesson from the Past”, was performed at the West Kirby Arts Centre in February 2019 and told the story of a young couple’s stormy love affair. Amid the drama, the young man discovers that his family were involved in the Hoylake lifeboat disaster of 1810.

Featuring 16 original songs, the drama was based on the tragedy that struck Hoylake’s then small fishing community over 200 years ago.

On 22 December 1810, ten volunteers took to sea in an open boat to assist the vessel Traveller, which had run aground in rough weather on the Wirral coast. However, in the dangerous conditions their boat was overwhelmed by the waves and eight of the crew lost their lives.

Details relating to the disaster only came to light in recent years after research by local historians. On 22 December 2010, exactly two centuries after the tragedy, a memorial to the eight men was unveiled outside Hoylake RNLI lifeboat station.

The musical drama was written by a descendant of four of the crew who were lost that day. John Stower, whose ancestors were members of the Bird family, presented a £700 donation to Hoylake RNLI lifeboat Coxswain Andy Dodd alongside the Mayor and Mayoress of Wirral, Councillor Geoffrey Watt and Mrs Anne Watt.

The presentation of the show’s proceeds took place in front of the memorial, where John also received a certificate of thanks on behalf of Hoylake RNLI’s crew and committee.

Coxswain Andy Dodd said: “The 1810 disaster is a poignant event in the history of the Hoylake community and it has been great to see the memory of those lost being kept alive through this show.

“We would like to thank the writer, cast and crew for their talented efforts and for donating the performances’ proceeds to the RNLI, which will help us to continue saving lives at sea.”

John said: “It is a great pleasure to make this donation to the RNLI and to show our support for this lifesaving charity through the “Lesson From The Past” musical drama.

“The history of my family and of the Hoylake lifeboat station are closely linked through this disaster, so I feel a strong connection.”

Established in 1803, Hoylake RNLI lifeboat station is one of the oldest in the UK.