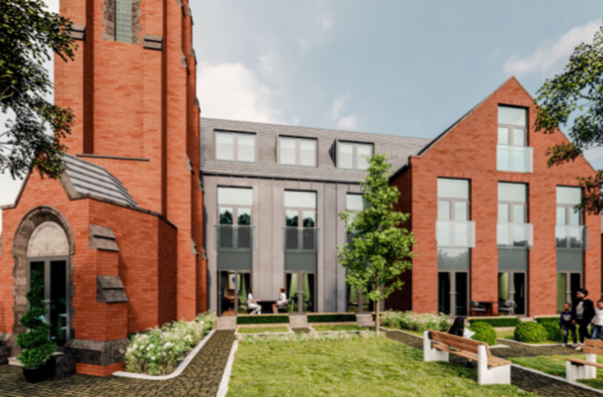 Revised plans for the conversion of Hoylake Presbyterian Church into housing will be considered by councillors later this month.

Winter Melia Developments was given permission in 2017 to turn the site into 18 apartments.

It followed the rejection of an earlier application to demolish the church and replace it with six town houses.

The developer subsequently submitted an application to scale back the number of apartments to 11 and convert the church hall into four houses, but this was later withdrawn. Now they want to revise the design of the approved scheme so that zinc cladding is used on part of the church and extension.

They also want to increase by three the overall number of bedrooms in the development, by making three of the 18 apartments dormers.

The report to councillors says the contrast of the cladding with traditional red brick will result in it having an “impressive appearance which makes a positive contribution to the character of the area”.

The development will not have any parking spaces, which planning officers concede may result in additional on-street parking in the surrounding area.

It adds: “The proposed development retains a non-designated heritage asset by converting it into residential use and this is to be welcomed, ensuring that the positive impact it has on the character of the surrounding street scene is retained. The proposed extension will be in keeping with the existing church whilst also appearing subordinate to it.

“The proposed development will not have an unacceptable adverse impact on the amenities of neighbouring properties, whilst the internal layout has been designed in order to provide acceptable accommodation for future occupiers whilst making best use of the existing church.

“The lack of any off-street parking is considered to be acceptable given the extremely sustainable location of the site.”

Objections have been raised by locals  over increased traffic and the alteration to the church facade.

The application, which is recommended for approval, will be considered at a meeting on Thursday 18 July.