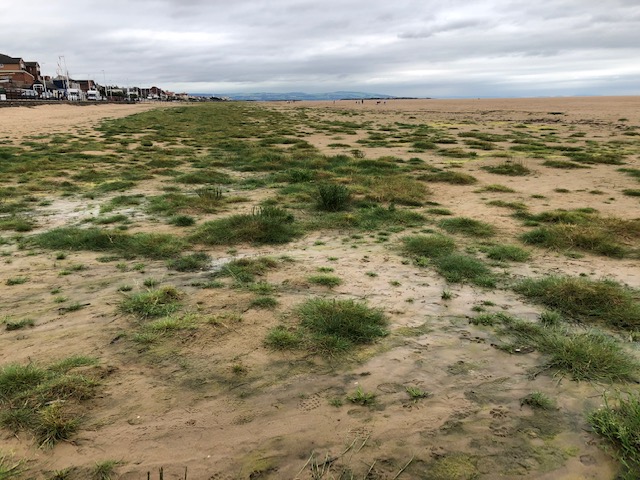 Opposition councillors have called a special meeting to discuss the axing of grass raking and vegetation treatment at Hoylake beach.

In March, Cabinet member for the environment, Cllr Liz Grey, backed a recommendation from council officers to pause the maintenance programme – including the use of the chemical Glyphosate and the mechanical raking of grass – pending the development of a long term plan for its management.

It followed an outcry last summer over the use of the toxic herbicide to kill vegetation on the sands, sparked by growing concerns over its impact on health and the environment.

Cllr Grey’s decision was made under what are known as ‘delegated powers’, meaning it did not go before a council committee for consideration.

In an accompanying document, the council cited advice received from the government’s advisors on environmental matters, Natural England: “The [Natural England] report states that ‘natural changes’ to the coast should be permitted and beach management interference measures – such as raking and the spraying of vegetation – can impact on natural coastal processes.

“The report specifically cites measures to control vegetation as requiring ‘clear justifications’ and acting in a counter ecological capacity – “beach raking to prevent the establishment of foreshore habitats can impact on the natural coastal processes and so would generally not be welcome from a ‘Natural change’ perspective”.

“The report continues that herbicides should only be used as a ‘last resort’ and subject to compliance with appropriate permissions – and acknowledges the potential impacts on wildlife and the marine environment due to
the unknown level of associated risk. On this basis, the report suggests that “Natural England is currently unlikely to support herbicide use.”” But many local residents – and the Friends of Hoylake and West Kirby Beaches – are unhappy, and a petition calling for the raking to be reinstated is nearing 3,000 signatures.

Opposition councillors have now ‘called in’ the decision for scrutiny, saying they are concerned it was “ill conceived and ideologically motivated rather than being based on Wirral residents’ wishes”, took place without consultation with residents and is irreversible.

However, as we reported last year, some local residents back the idea of leaving nature to it – while community group Hoylake Village Life has commissioned its own research into the issue, which has received a number of expert endorsements.

They argue the reason for increased vegetation on the beach is the rising level of sand, and that a dune system such as that at Birkdale will be the most likely outcome.

In a recent post on their Facebook page, they said: “Ongoing suppression of vegetation and subsequent dune system will only result in the underlying level of the beach simply continuing to rise; with wind blown sand continuing to encroach onto road and into property, potentially creating environmental and economic problems for our own and future generations”.

They add: “Anecdotal concerns that Hoylake “will go like Parkgate” are unsupported by scientific evidence and we are saddened to see this repeatedly being promoted, misleading the public on this important issue and ignoring the advice of scientists and experts. We think this is extraordinary and unnecessarily incendiary logic.” Hoylake Vision is currently running a consultation on a neighbourhood development plan, including inviting ideas from local people for the future use of the promenade and beach.

The decision to pause the beach management programme will be debated at a meeting of the Environment Overview and Scrutiny Committee on Friday 21 August.

West Kirby beauty salon @Positivetouch_ has gone out of business due to the impact of the pandemic.

Owner Laura Weston revealed her decision to bring the shutters down in a heartfelt message on the beauty salon’s website.

A popular West Kirby beauty salon has closed its doors for good due to the impact of the Covid-19 pandemic.

A crew from @HoylakeRNLI were called out to rescue a stranded yacht on Saturday morning.

Hoylake RNLI lifeboat rescued a yacht which had suffered engine failure with four people on board.