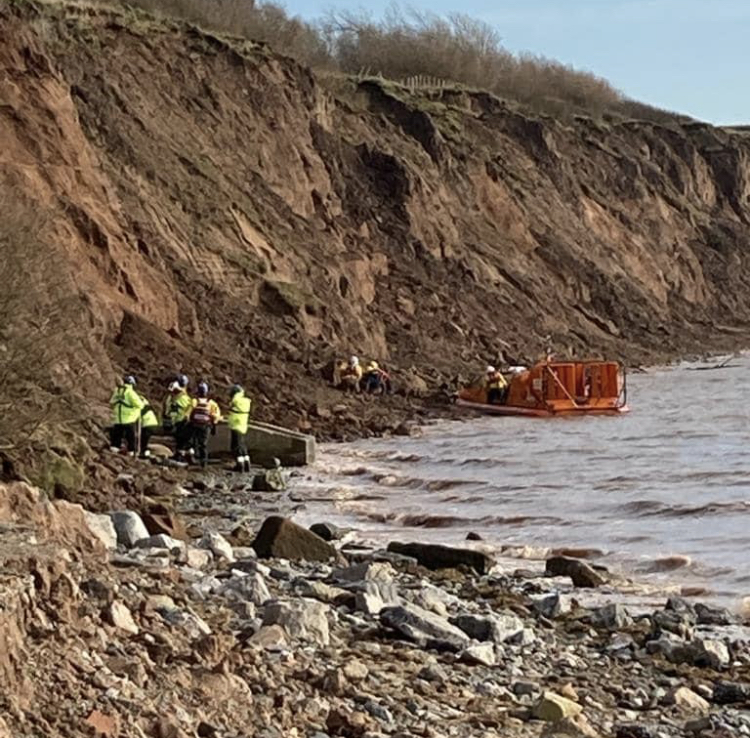 Two people had to be rescued after getting stuck in mud caused by debris which had fallen from cliffs at Thurstaston.

Wirral, Flint and Crosby Coastguard Rescue Teams were called in at lunchtime today.

Due to an incoming high tide, Hoylake hovercraft was scrambled to assist along with teams from Merseyside Fire and Rescue Service.

In a statement, Wirral Coastguard said: “Coastguard Mud Rescue Technicians were joined by RNLI crew and firefighters and the multi-agency team worked together to free the first casualty who was brought on board the hovercraft.

“The second casualty, who was suffering from a leg injury had to be carefully extracted by hand before being taken on board the hovercraft using a basket stretcher.

“The casualties were transported to safety and handed over to the care of the North West Ambulance Service.”

“Through the coordinated efforts of the different emergency services, together we were able to free the casualties and bring them back to safety.”

Wirral Council later took to social media to issue a warning to people to take care.

A post on Facebook read: “There has been a further collapse of the Dee Cliffs at Thurstaston recently.

“The cliffs here are naturally unstable and visitors should be aware that a collapse can occur at any time.

“For that reason we are reminding people not to try and walk over any collapsed material – or walk up the cliffs to go around it.

“People should also take extra care not to walk into the estuary mud trying to avoid any collapsed material.”