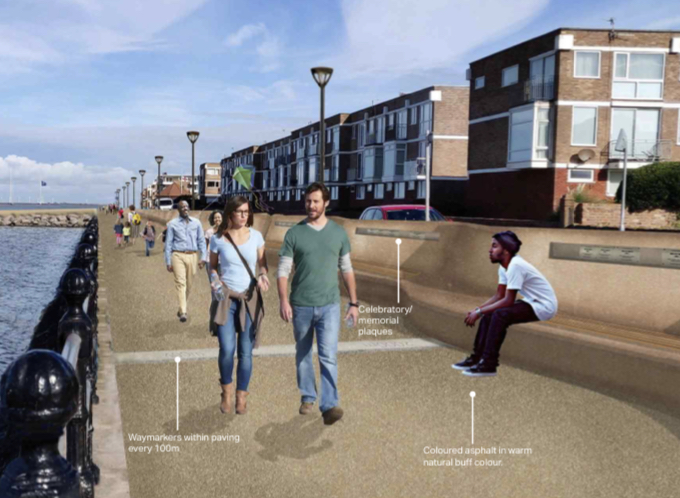 Hundreds of people are opposing the proposed flood wall in West Kirby, with a decision set to be made by councillors in the next few weeks.

The scheme, which also includes an upgrade to the paving and highway on South Parade and the introduction of a cycle lane, would be the biggest change to the face of the town’s Victorian promenade since it was built.

The overwhelming majority of the 200 comments submitted to the planning consultation are against the £6 million plan, while an online petition has already gathered more than 500 signatures.

The planning committee is set to consider the application in March.

Here, we take a look at the detail of the scheme and the arguments for and against it.

Why are new flood defences needed?

West Kirby has suffered from flooding from tidal surges and wave over-topping for decades, but officials say it is becoming a more regular occurrence.

A report drawn up in 2012 – the Wirral Coastal Strategy – said West Kirby required intervention within 20 years and rated the urgency of the issue as ‘moderate’.

On 5 December 2013, the town suffered the worst damage since 1990, with high tides and gales combining to cause damage to the seawalls, boundary walls and internal flooding in nine homes and four businesses.

The Marine Lake railings would be refurbished and the original shelters renovated and relocated to keep the Victorian heritage.

What do opponents say?

They argue it is in contravention of Local Plan policies to protect coastal views and prevent harm to the special character of the promenade.

Those we have spoken to are not against improved flood defences but would rather the council bolster what currently exists.

Sue Ramsey, who lives on South Parade, told West Kirby Today: “The design that has been submitted to the planners has not addressed what was discussed and proposed in the consultations, with the function of South Parade confused.

“The design is trying to be everything to everyone – a traffic route including a bike lane, a leisure destination with seating, facilities, signage etc and, with a concrete flood wall, a residential area with some businesses.”

She acknowledged that some of her neighbours are in favour: “Some are for it as they believe, but no real proof yet, that it will protect their parking on the front of their property and also may help limit insurance premiums.

“Most of us don’t want a flood wall but if we have to have one and the environmental case is understood by many of us, we [just] want it to be as sympathetic in design as possible and workable, which it isn’t at the moment.”

Another local resident – who wished to remain anonymous but has experience of commissioning flood defences – told us the council would be better investing in protecting individual properties.

They said: “The best flood defences are those you can’t even see, such as raised walls or a road.

“This is wholly an engineering-led project which gives little or no regard to the fact it is a Victorian promenade enjoyed today as much as it was when it was built.

“The wall is taller than most children and is a monstrous piece of civil engineering. The council need to be looking at it with a finessed eye, not protecting parts that don’t need to be protected. They should strengthen what is already there, such as the walls around people’s houses.”

They added: “I fully accept the council has to make difficult decisions, but on balance is it really something worth doing? Those properties can be protected. This is a case of the tail wagging the dog.”

What does the council say in response?

However, Councillor Liz Grey, Chair of the environment, climate change and transport committee, issued a strongly worded defence of the proposal, claming opponents are “a small, but vocal minority who are trying to politicise this” and accusing them of “wilfully jeopardising the safety of local people, businesses and properties”.

She said: “This scheme has been through a very long planning stage and local councillors and residents have been engaged and have contributed throughout. That design has been changed and has included suggestions from these consultations. This is very much a collective scheme for and with local people.

“Personally, I think that it is a significant achievement to manage to offer such protection while also providing excellent quality design and what I believe will enhance the visitor experience at West Kirby.

“We are actually very fortunate to have secured so much funding for this as the money available for such schemes is very limited and the number of places bidding for it is growing as the climate emergency unfolds.

“We already have coastal communities not far from here that have been told to be ready to evacuate in the next few decades as it is considered too expensive to try and defend them from future sea level rises.

“Let’s invest in West Kirby and celebrate its long and prosperous future while we can.”

If the scheme is approved, the project is expected to take seven months to complete, with contractors able to work from 8am-6pm during the week and 9am-1pm on Saturdays.

The awarding of the contract is already included in the council’s forward plan of decisions expected to be made between March and June.

It would take three months for the necessary permits and closure orders to be approved, so work would not start immediately.

How can I let the council know my views?

Comments on the proposal can be made at https://planning.wirral.gov.uk/online-applications/applicationDetails.do?keyVal=_WIRRA_DCAPR_109770&activeTab=summary until 26 February.

The online petition set up by local residents can be found at https://www.change.org/p/leader-of-wirral-borough-council-save-west-kirby-promenade-pursue-other-flood-alleviation-options-stopthewall