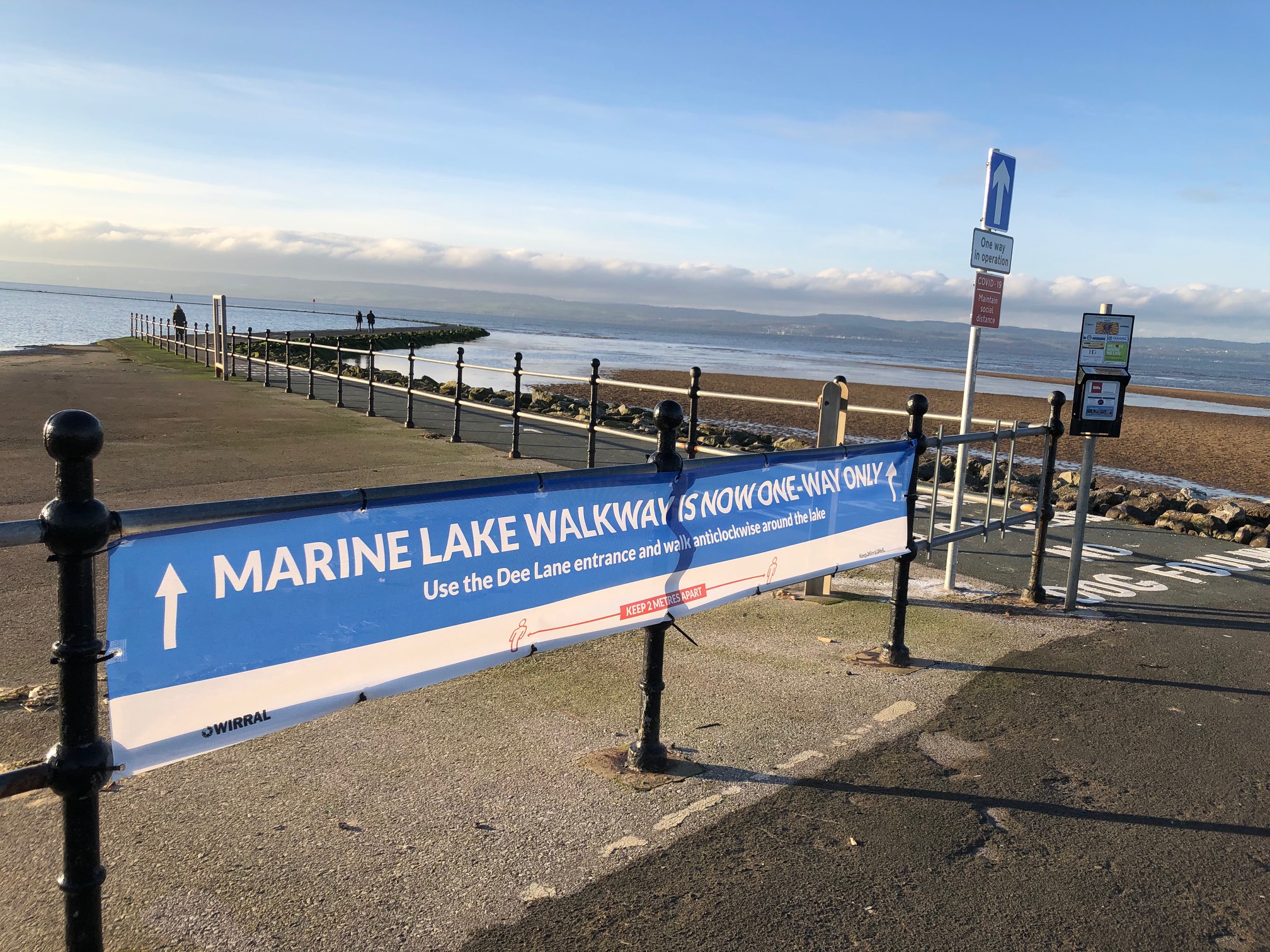 Wirral Council has made the footpath around the Marine Lake one-way, in a bid to help with social distancing. Paul Johnston discovered that not everyone is following the signs…

One of the great joys of working from home during lockdown has been using the time previously spent on the commute to the office going for an early morning stroll around the Marine Lake instead.

Judging by the number of working age people I pass while out getting my daily exercise, I am not the only one.

During the first lockdown, Wirral Council tried to close the path because of concerns over social distancing. It made no difference to some walkers, who either didn’t notice the massive signs or (more likely) simply chose to ignore them. The path was ‘reopened’ when restrictions were eased.

The local authority has now decided to make the route one-way (an idea suggested by several West Kirby Today readers 10 months ago), and contractors arrived early on Monday morning to erect ‘no entry’ signs and paint direction arrows on the ground.

I was intrigued to find out if people would stick to the route, so my young daughter and I wrapped up warm after breakfast and headed down to the front to find out.

The one-way system runs north to south, starting at the Morrisons/sailing centre end of South Parade and finish at the Sailing Club. Conveniently for me, this is the direction I usually take.

As we approach South Parade, via Salisbury Avenue, I can’t see anyone walking around the lake. For a moment I wonder whether the path is shut and we will have to make do with a walk along the prom but, as I get closer, I spot a couple of walkers dutifully following the signage and entering the path by the sailing centre.

I step onto the path and, squinting in the bright winter sun, see that ahead of me everyone is heading in the same direction, although there are fewer walkers than usual.

As I push Lucy along in the cold, cursing myself for forgetting her mittens (my wife will tell me off when she reads this!), I realise that some of the traditions of a walk around the Marine Lake have been lost.

That quick nod and hello to someone walking in the opposite direction who you vaguely recognise but can’t quite place (are they a pub regular, a parent from school or is it just from the walk around the lake?).

Another downside of walking in the direction decreed by a Town Hall official is that the stunning view of Hilbre Island is behind you – although you do get to, ahem, admire Connah’s Quay power station.

It could also be argued that it is easier to socially distance from people walking towards you, rather than those faster paced strollers who sneak up behind and catch you unawares (making you jump if, like me, you are wearing headphones).

Indeed, my friend Jim, who had walked the route earlier, sent me a message observing that – unless they have the stride of Usain Bolt – walkers overtaking you are alongside you for longer than those heading in the opposite direction.

It is only as we approach the Sailing Club, at the tail end of the path, that we eventually encounter walkers heading in the wrong direction.

The first is a middle-aged man who spends some time taking photographs of the lake. He waits until the coast is clear and walks off briskly (doubtless drinking in that view of Hilbre Island as he goes).

Then, as I take a photograph of the newly installed ‘no entry’ sign, a woman jogs past, heading the wrong way. “When did all this start?”, she asks.

“Yesterday”, I reply, adding, rather smugly: “You need to go along the prom and start at the other end.”

She thinks for a moment and then – after most likely reasoning that I am an unlikely fit for an undercover council enforcement officer – jogs on regardless. “I’ll start doing it tomorrow!”, she shouts, waving as she goes.

As we head home for hot drinks (a coffee for me and warm milk for Lucy), I reflect that, if challenged, others will probably say the same.