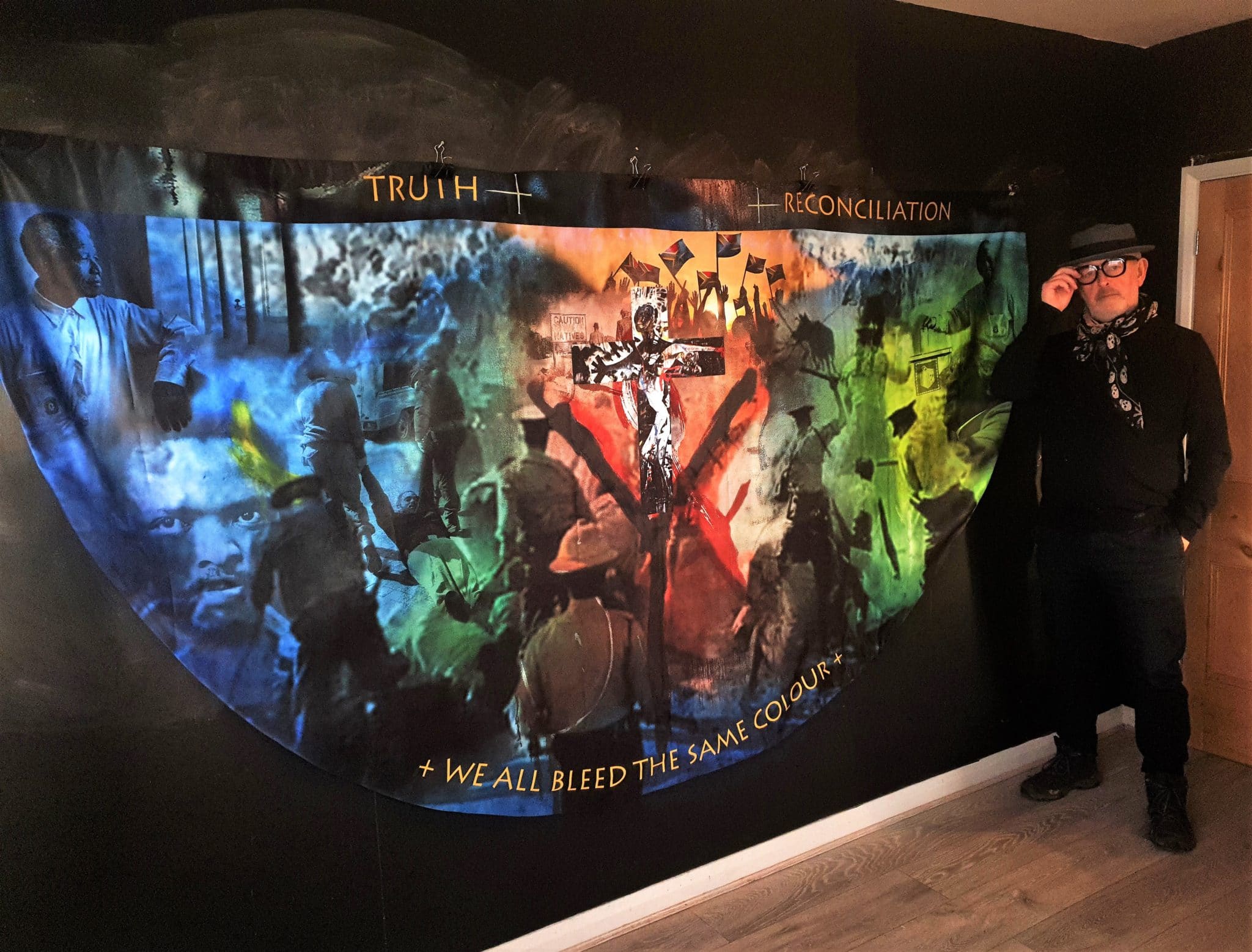 Terry Duffy, whose studio is on the beach, has an international reputation for unique and challenging work over five decades.

It includes the creation of technicolour copes – a semi-circular religious vestment worn by senior members of the Christian church – depicting deeply moving and provocative historical scenes of inhumanity and terror alongside words of unity and hope.

The copes themselves are based on Terry’s enormous and spectacular paintings interpreting his response to people’s quests for truth and reconciliation in the aftermath of life changing, horrifying and nationally and internationally significant events.

His latest cope was created following a trip to South Africa in 2014 when he met with Archbishop Desmond Tutu at Cape Town Cathedral where his striking 14-foot high painting in the shape of a crucifix, ‘Victim, no Resurrection’ had been installed as the centre piece to an event commemorating 20 years since the end of Apartheid in 1994.

‘Victim, no Resurrection’ is a metaphor for the plight of victims across cultures in search of greater peace and understanding and since its completion has constantly been exhibited in churches and cathedrals around the world.

The meeting and long discussion with Archbishop Tutu resulted in Duffy being inspired to create a Truth and Reconciliation cope for the great man himself and although designed and created while the Archbishop was still alive, the Covid-19 pandemic prevented any chance of delivery, before he died in December 2021.

With the creative and technical support and expertise of photographer Mark Howard, Duffy was able to create complex digital photomontage of imagery that depicts not only Mandela, Biku, and Tutu but also the atrocities brought upon black South Africans during Apartheid.

At Lambeth Palace in London on 3 February, the Archbishop of Canterbury will officially bless the cope created by Duffy. It will then be passed to Michael Weeder the Dean of St George’s Cathedral Cape Town for it to be worn in Cape Town and throughout South Africa to commemorate the life of Desmond Tutu, in remembrance of those who were victims of Apartheid and in hope and reconciliation for the future of South Africa.

Terry Duffy said: “Victim, No Resurrection generated a deep response in Archbishop Tutu because it reminded him of the cruel and horrific realities of Apartheid, the inhumanity and lives lost and destroyed during that time.

“It led to discussions with Cape Town Cathedral’s Dean Michael Weeder from which the Tutu Cope painting emerged and which was then turned into this beautiful vestment itself.

“The process for every cope I have made has been a profoundly moving experience, then becoming a great honour when the cope is blessed and worn by the people they are designed for as they seek reconciliation between peoples.

“This is certainly true of the Tutu Cope given what happened in South Africa for nearly 50 years and the role Desmond Tutu played during the time and particularly afterwards through the Truth and Reconciliation Committee.

“The blessing ceremony will take on extra poignancy now that Archbishop Tutu has sadly died, but I am still very pleased that the cope will go to South Africa and be used by others as a symbol of what he and others strived for and which, of course, continues today.”