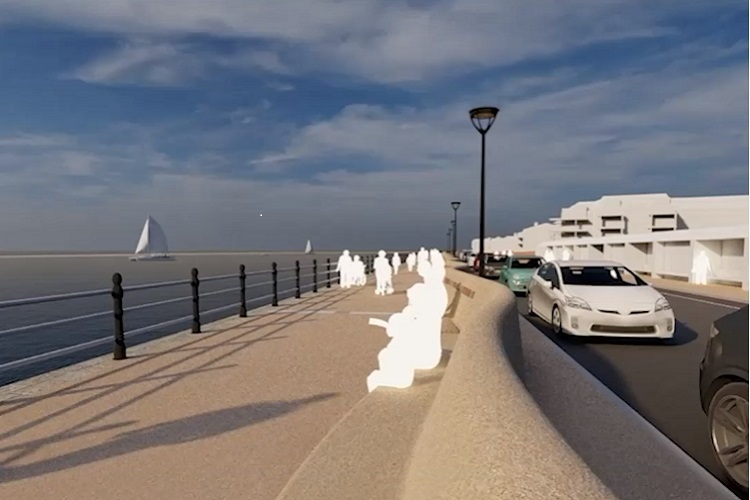 The cost of the new West Kirby flood wall has spiralled to almost £10 million.

Wirral Council says it is down to a rise in the cost of and amount of materials required, and a need to complete the scheme by next winter to minimise the impact on wildlife.

A report to the council’s Policy and Resources Committee on Tuesday 15 February reveals the Government has agreed to pay an additional £3.8 million, meaning the increased bill won’t be footed by local council tax payers.

Work on the project – which is designed to protect 70 properties and will see the installation of new paving and a cycle lane – is expected to get under way in spring.

The report says: “An additional £3.3 million of grant funding has been secured from the Department for Environment, Food and Rural Affairs (DEFRA) towards the increased costs associated with this scheme.

“A further £0.535 million has also been granted from the Environment Agency.

“There will be further budget virements processed in 2022/23, which coupled with these additional grants, will mean the total funding for this scheme will be approximately £9.7 million.”

In 2018, the cost of the scheme was put at £3 million, although this had risen to £6 million when detailed designs were unveiled in 2020.

The council is contributing £2.8 million to the overall cost from its ‘capital’ programme. This fund can only be used for building or infrastructure projects and is separate to the money used to pay for day-to-day services such as libraries, some of which are currently the subject of controversial budget options.

The design of the wall has divided opinion, with a 1,000 name petition and almost 200 comments submitted to the planning committee when the scheme was decided last November.

In response to criticism over the design, officials previously said it reflects feedback during a public consultation in March 2019, including that it should have more interesting features, incorporate public realm, retain Victorian features and make space for cyclists.

They argue there will be sufficient space for pedestrians, wheelchair users and car users to get on to the prom because the ‘wave’ nature of the design means the space on both sides varies and there are 15 access points along the route.

A Wirral Council spokesperson said: “The reasons for the additional costs of the scheme are largely down to significant increases in the costs of materials and the need for the work to be completed before winter 2022 in order to minimise the impact on wildlife.

“Meeting this challenging timescale means the project is more labour and resource intensive. The design of the scheme has also had to be amended to address ‘very poor’ ground conditions identified along the promenade, which requires the use of more steel and concrete than originally estimated.

“The bulk of this additional funding is being provided through external sources and there is no requirement for further capital investment from the local authority.”