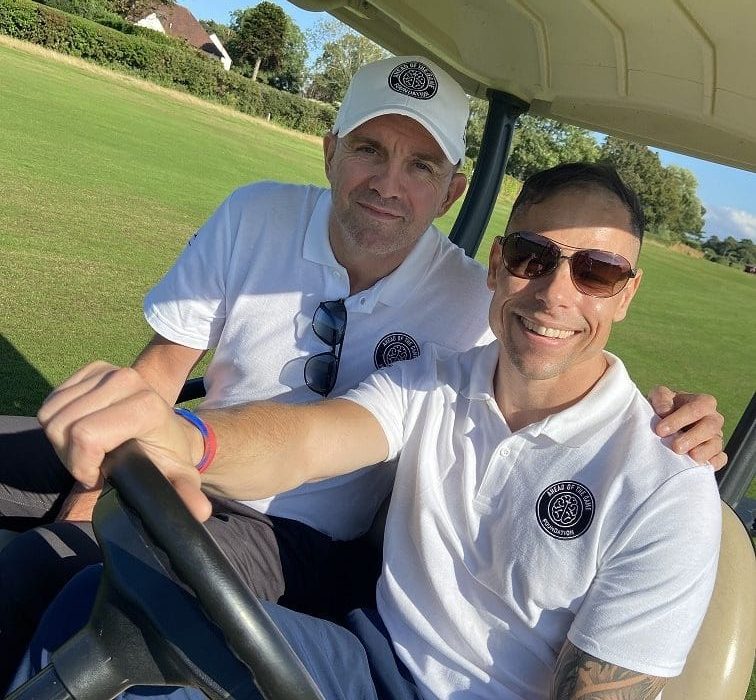 A Wirral brain tumour and cancer charity, set up by a former world kickboxing champion and a former Premier League footballer, is organising a coastal walk from West Kirby to New Brighton.

The Ahead of the Game Foundation, based in Wallasey and established by Dave Bolton and Dominic Matteo (pictured above), is asking people to walk the 10-mile route as part of March Brain Tumour Awareness month.

In 2014, Dave Bolton, 40, from Greasby, who became world light heavyweight kickboxing champion in 2009, was diagnosed with a Glioblastoma Mutiforme 4 brain tumour and given just months to live.

Over the next 14 months Dave endured two brain surgeries, the second lasting eight hours and, against all the odds and medical statistics, Dave continues to outlive his terminal diagnosis.

In 2020, along with former Liverpool, Leeds United and Scotland defender, Dominic Matteo, 47, who himself has been recovering from a rare brain cancer called ependymoma rela fusion, they set up their foundation, dedicated to raising awareness of brain cancers and their impact on mental health.

The foundation launched an inaugural golf day at Caldy Golf Club last September receiving more than £25,000 in donations and throughout February, Dave completed a charity challenge to swim in freezing water without wet suit protection every day for 28 days, raising £1,850.

The foundation has also joined forces with The Brain Tumour Charity and Brain Tumour Research UK in lobbying parliament for fairer funding for this type of cancer.

The Wirral Coastal Walk takes place on Saturday March 19 and participants are asked to meet at Morrisons car park, West Kirby at 10am for a 10.30am start.

The route is along the waterfront through Hoylake and Meols past Moreton and Leasowe to the Black Pearl pirate ship at New Brighton, with arrival around 3pm.

People are also welcome to join the walk at any stage along the route.

At the finish, The WellBeing Campus, based in Bebington will be hosting some fireside reflections, and inviting everyone to enjoy hot drinks, cakes and snacks provided by Wallasey’s The Sea Shanty café.

Dave, who believes that cancer rehabilitation shouldn’t cost a penny, said: “Historically just one per cent of the national spend on cancer research has been allocated to brain tumours despite the fact more than 16,000 people are diagnosed every year in the UK with a primary brain tumour, including 500 children.

“There are more than 150 different types of brain tumour and they are the biggest cancer killer of children and adults under 40 with on average more than 5,300 people dying from them each year.

“Living with a terminal disease and living with someone who has one can take a terrible mental and emotional toil, as both Dominic and I can testify, and so we created the Ahead of the Game Foundation to help sufferers cope with the mental, physical and financial health and wellbeing challenges that they face daily, and this vital support costs money.”

Dave, who will be without Dominic for the walk, added: “I received a great response from the public last month when I swam every day in very cold water to raise awareness and funds that will help us build and deliver our ongoing and new health and wellbeing programmes.

“Unfortunately, Dom can’t attend the day but I’m hoping that as many people as possible will join me and walk the 10 miles from West Kirby to New Brighton with us to raise even more money.

“It’s a free event for adults, children, families, pushchairs, dog walkers, in fact everyone to come along, take in the views, get some air and donate along the way. It will be a walking convoy for cancer care and a lot of fun and, of course, really good for raising spirits.”

The Ahead of the Game Foundation will use all monies raised to support more people on its 12-week health and wellbeing cancer rehabilitation programme, which provides free rehabilitation to those diagnosed with brain tumours and cancer.

There will also be money buckets on the walk for people to donate.