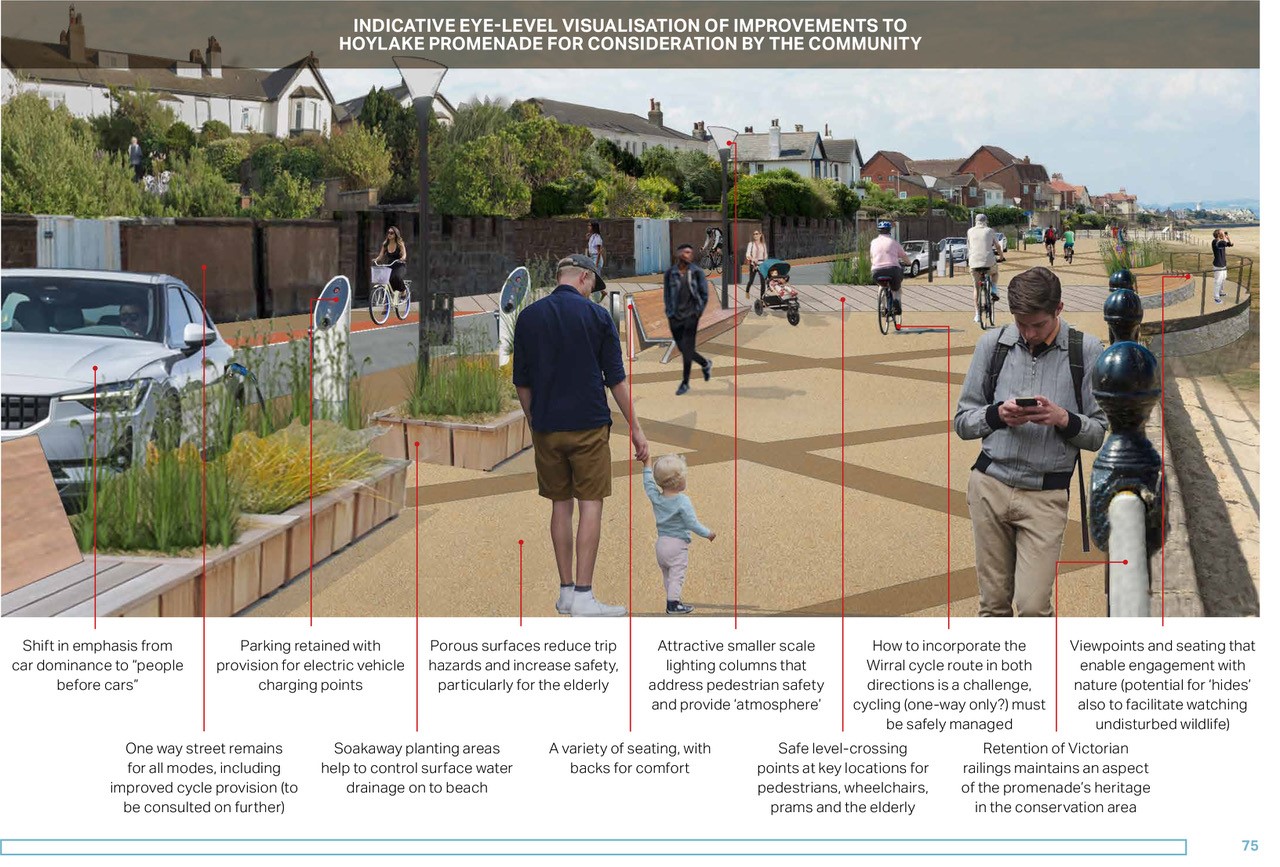 Community forum Hoylake Vision is again inviting residents and businesses to have their say in helping to shape the town’s places and spaces in the future.

The group is keen to discover more opinions and thoughts on how the town’s key public assets should feel and function, the types of activities, services and spaces on offer, and how they should adapt in future.

Following an earlier consultation round in 2020, the forum has re-opened an online community engagement website, and is inviting the community to bring forward more ideas which will inform an update to the Hoylake Neighbourhood Development Plan (NDP).

Visitors can share their thoughts on an ideas wall and interactive map, as well as taking part in a survey.

On the basis of the 2020 consultation, the forum worked with consultants AECOM to produce a draft ‘Masterplan’ and a more detailed ‘Design Guide and Codes’ for Hoylake which can be found at www.hoylakevision.org.uk.

Ideas explored in the documents include a re-imagining of the town’s promenade to include porous surfacing, EV charging points and improved accessibility (see artists impression at the top of the story), the possibility of a Wildfowl and Wetlands Centre to the east of the Carr Lane area, and a range of options for the town centre.

The current NDP, which was produced and is managed by Hoylake Vision, came into force as a statutory part of the Council’s Local Plan in December 2016 following a public referendum, overseen by the electoral commission and the local authority, in which 86 percent of those voting were in support.

The consultation is focused on the principles of what kinds of development people would like to see; where it could be and what it could feel like, rather than detailed and specific plans.

Once this engagement has taken place, more detailed objectives, priorities and policies will be developed later in an updated NDP.

Mark Howard, chair of the forum’s management group, said: “The last round of consultation in 2020 brought forward some great ideas. On the back of that we were able to produce a draft Masterplan and Design Guide, but the level of response to the consultation was lower than we would have liked and it is important for us to address that.

“Although we had over 200 surveys returned and more than 1,000 additional comments and interactions I know we can do better.

“For example, we met recently with residents in the Carr Lane area who said they sometimes feel cut off from decision-making processes and many people in the area were unaware of the previous consultation. So we hand delivered surveys and membership leaflets to all households and businesses there in order to ensure as many people as possible have an opportunity to be involved.

“Now the draft documents have been published, there is something more tangible for Hoylake residents and businesses to respond to. I really hope that people will read them and respond with their thoughts. There are some really good ideas in there which, with the support of the community, could attract investment in future, creating jobs and making Hoylake an even better place to live, work and visit.

“The whole thrust of the emerging Neighbourhood Development Plan (NDP) is to allow residents and businesses to have much greater influence on future decisions around any change; when it happens and what it looks like, rather than simply leaving all decision making subject to ‘one size fits all’ policies of the council.

“It is important to point out that making a plan is an extremely rigorous process. Once prepared, the renewed draft NDP is subject to further review and a six-week statutory public consultation, followed by an independent examination and finally another referendum. It must also be supported by a consultation statement which records all consultation responses. People can be assured that nothing will happen that does not have clear evidence of broad community support.

“I hope everyone will take this chance to have their say because this is really important. Through the NDP we have an opportunity to ensure a vibrant, sustainable and exciting future for generations to come.”

To take part in the consultation visit: www.placed-engagement.org.uk/hoylake