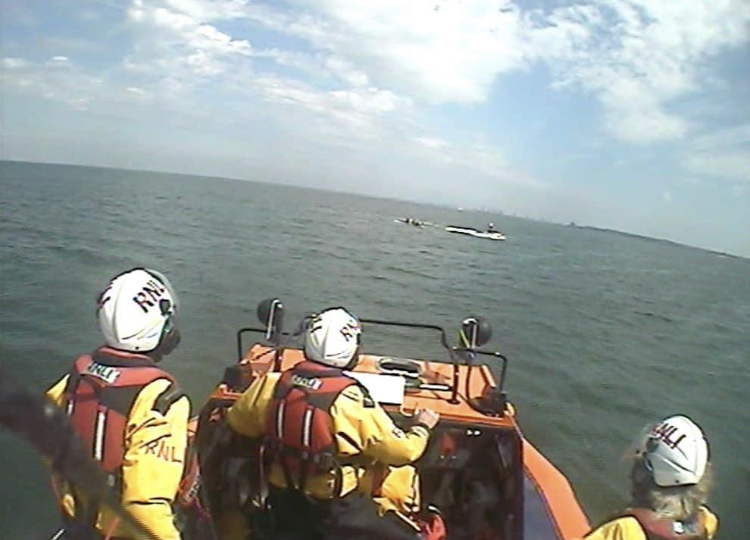 Lifeboat crews in Hoylake abandoned a car wash fundraiser to rescue a group of paddle boarders who had been swept out to sea.

The alarm was raised at 12.50pm on Sunday 15 May as the group of four were struggling against an offshore wind and ebbing tide.

The hovercraft headed to the casualties’ position around 1.5 miles offshore from Leasowe Lighthouse. A member of RNLI Wirral Lifeguards on a jet ski had located the casualties and was keeping them safe.

The hovercraft soon arrived on scene, where the paddle boarders had rafted themselves together using their paddles and safety leashes. The crew brought the casualties on board and deflated the boards so they could all be helped ashore.

After checking that the casualties did not need any immediate medical attention and with everyone safe and well, the hovercraft flew them to the beach near the Gunsite Car Park. The hovercraft landed and passed the casualties and their boards to the Wirral Coastguard Rescue Team. With nobody requiring any further assistance, the hovercraft was stood down and returned to the lifeboat station.

Hoylake RNLI hovercraft commander Chris Williams said: “Paddle boarding has become hugely popular around our coast and although the casualties were caught out on this occasion by the wind and tide, they were wearing personal floatation devices, carrying mobile phones in waterproof pouches, and using their safety leashes.

“It’s lucky that the alarm was raised in good time, as the conditions would have carried the group further out to sea. If you’re heading out on a paddle board, always check the weather forecast and tide times and tell someone where you’re going and when you’ll be back. Keep a way of calling for help attached to you in a waterproof pouch or your pocket at all times. Always wear a floatation device, keep your safety leash attached, and in an emergency dial 999 for the Coastguard.”