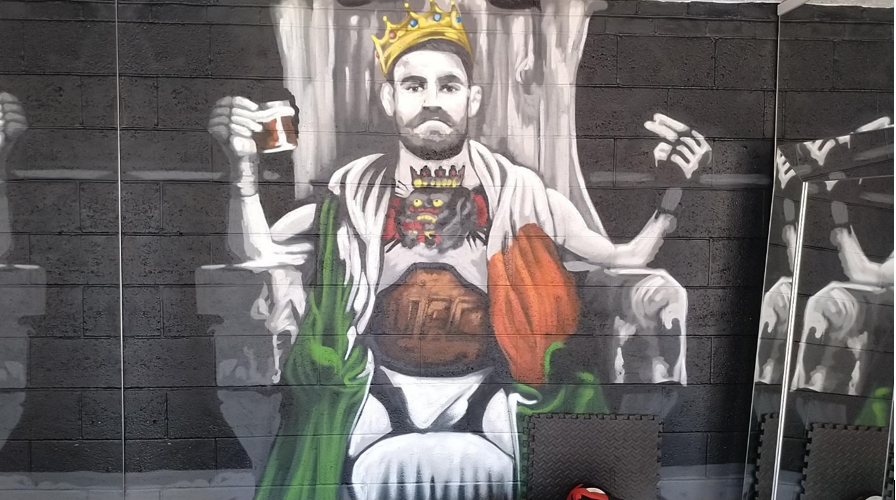 A Caldy man who was identified by a distinctive mural on his wall has been jailed for 29 years as part of an international operation targeting criminals who used a mobile encryption service.

Ryan Palin, 36, of Mereworth, was sentenced to 29 years on Friday 17 June at Liverpool Crown Court for conspiracy to cocaine and amphetamine, following a trial.

On Thursday 9 December 2021, officers executed a warrant at Palin’s address.

At the property, high-value clothing worth £136,000 and watches worth £129,000 were found. All were seized under the Proceeds of Crime Act.

Palin was arrested, charged and remanded into custody.

Examination of data from encrypted phones revealed that, using the handle Titch.com, Palin was involved in a conspiracy to supply 700kg of cocaine, 15kg of heroin and 40kg of amphetamine between 1 July 2019 and 12 May 2020.

An image on the encrypted phone showed a distinctive mural of the Ultimate Fighting Champion star Connor McGregor.

This proved key to linking the encrypted phone to Palin, as officers were able to identify that the wall the mural was painted on was a wall at the home address of Palin.

Despite this damning evidence, Palin still thought he had a fighting chance of walking free and denied the charges put to him, but was found guilty by a jury.

Palin’s sentence forms part of an operation involving European law enforcement agencies working with the NCA, and supported across the UK by police forces and Regional Organised Crime Units.

The operation came about after law enforcement officials in Europe managed to crack the ‘Encrochat’ service being used by criminals involved in serious and organised crime to carry out their business.

Detective Sergeant Graeme Kehoe said: “We welcome todays verdict and sentence and now that Ryan Palin is behind bars and can no longer peddle huge amounts of drugs and misery on the streets of Merseyside and beyond.

“Despite the overwhelming evidence against him, Palin chose to go to trial. Fortunately the jury saw through his lies and Palin can now consider the consequences of his actions while he serves a significant time in jail.

“Palin’s substantial sentence should serve as a stark warning to anyone involved in this criminality that there are serious consequences. We simply won’t let people live off the profits of criminality while our law-abiding communities work hard to make an honest living – we will find you and bring you to justice.

“Merseyside Police, along with law enforcement agencies across the world, will leave no stone unturned in our pursuit of those people who think they are above the law, and we will continue to target anyone involved in serious organised crime to keep this positive momentum going.

“We rely on our local communities to be our eyes and ears as part of these investigations and I would continue to urge people to come forward if they have information which could assist us.”

Anyone with information on drug dealing in their community is asked to contact @MerPolCC, 101 or Crimestoppers, anonymously on 0800 555 111.