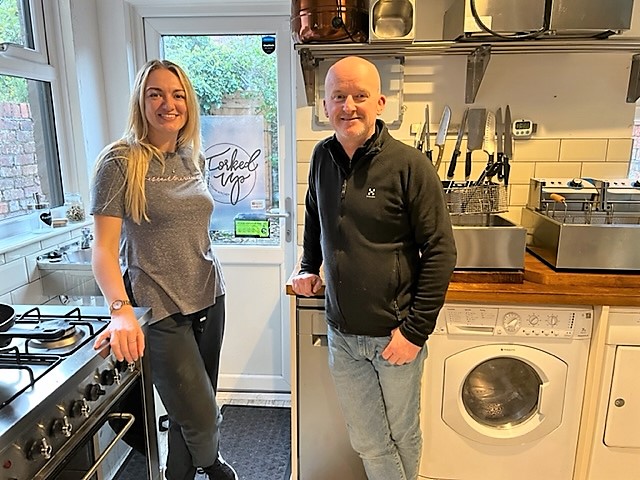 An app which aims to be a local alternative to multinational food delivery firms has secured new venues in Wirral.

It was initially designed to help people order more safely and easily and pay instantly at restaurants, cafés, pubs and bars during the height of the pandemic – and now also provides takeaway food and delivery options.

After successful trials at the White Lion in West Kirby and The Irby Mill, more venues are now taking the plunge with the free-to-join service in a drive to increase their revenue.

At the same time, Mimu’s delivery partner, Wirral based Argyle Satellite Taxis, has expanded its commitment by recruiting a team of dedicated food delivery drivers.

Bamboo Thai, which operates the kitchen at the White Lion and at Woodside Ferry Village is now offering Mimu’s takeaway delivery alongside in venue services, and has recently been joined by Low Slow Dough.

Carleigh Bond, owner of Forked Up Vegan (pictured above with Dave Otter from Mimu) said: “I chose Mimu because it is a small, independent, local business and not a big corporate set up to make vast amounts of money. Mimu’s costs are so much lower than any of the bigger boys and they also provide that bespoke personal service.

“I like to shop independent and use small local businesses wherever possible, so extending that to a service like Mimu fits perfectly with my philosophy, because it is so important, especially in the current climate, that we all support each other.”

Mimu is currently in talks with other venues and businesses across the Wirral and has a strong growth pipeline, according to director Dave Otter: “We designed the Mimu app specifically to give local businesses an exceptional local and personal service that the global well-known names cannot.

“We are a family-run business, not a multinational and we understand the pressures that our high streets have been put under during the last 18 months.

“There’s no joining or set up fees and expensive equipment isn’t required and we are considerably cheaper than any major rival, some of whom charge more than £800 just to join before taking a much greater percentage from the venue than we do. With Mimu you only pay when you sell something.

“After successful trials of the app during the considerable challenges of the last year, it’s really pleasing for us that more and more businesses are willing to come on board and try Mimu out, proving that bigger is not always best and sometimes being smaller and perfectly formed can have its benefits.”