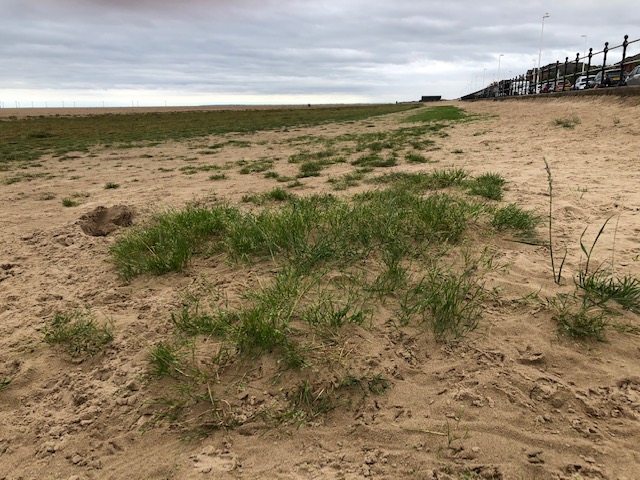 Grass on Hoylake beach should not be raked for another “two or three years” in order to properly assess how to best manage it over the next few decades, according to a leading ecologist.

The move has led to a storm of protest, with around 3,000 people signing an online petition demanding its reinstatement organised by local resident David Gilbertson. He addressed councillors and read out some of the comments he had received from local people.

Dr Parker – who previously sat on the Chief Scientists group of UK nature conservation agencies and is currently chair of the national environment advisory group on the National Trust – said there is a need to “face up to the fact that the beach is rising” and be “more accepting of natural processes working with and not against nature”.

“Wirral Borough Council and other agencies and the local communities have to face up to the fact that the sea level is rising, we’re getting more storminess, we’re getting an increasing tendency, because of the natural dynamics of the system there, for beach vegetation to form.

“You are asking me about short term solutions but we need to look at that in the context of much longer term planning for the future. That is why we need to do these evidence based studies so we get really good evidence to come with proposals that will make sense, be sustainable and deliver what is required for that coastline.”.

The meeting also heard from Nicola Verkade, who owns a number of holiday rentals, including one overlooking the beach. She said her visitors are being “eaten alive by mosquitoes being attracted the vegetation on the beach”, that she is losing trade as a result and fears for the impact on the local economy.

Hoylake councillor Andrew Gardner, who called in the decision to stop raking, argued that 90 per cent of residents who responded to a survey by ward councillors two years ago want a sandy beach and that all they are asking for is the beach management plan approved in 2010 to continue to be enacted. He added: “We don’t want to end up in a position where there is no going back.”

His ward colleague Cllr Tony Cox expressed anger that local councillors had not been involved in the decision making process. He accused Cllr Grey of “consulting with organisations that agreed with her” and said he feared if the grass was not raked local people would be left with no amenity space in the town apart from a small park and a football pitch.

Other contributors included Charlie Warren from Friends of West Kirby and Hoylake beaches who described allowing sand dunes to develop along the beach as a “misguided” idea which should be “resisted”.

Cllr Grey said pausing the raking had been a “very well informed decision” based on advice received from the government’s advisors on environmental matters, Natural England.

She added that the council “can’t rake and survey the beach at the same time – a pause is needed to gather the evidence.”

She added that she had instructed council officers to look at repairing the drains on the promenade, which it is widely accepted are contributing to the issues on the beach.

He said: “The change that has been taking place at Hoylake has been going on for a long period of time – there is little doubt that in recent years the beach levels have been rising….the result is that theupper beach on the promenade is higher and drier and that is resulting in more issues with wind blown sand but also things such as less spartina grass.

He added: “We are not dealing with an undisturbed system – it has been interfered with for a long period of time….the raking and the spraying has actually slowed down the natural processes that are taking place.

He argued that the council “has little choice but to look at finding an alternative, more sustainable solution” as Natural England “are not going to approve the existing status quo moving forward”.

“We need good quality evidence and data to inform future management of the beach and establish a baseline. We can’t rely on preconceived views or opinions – we need the data and the evidence.”

He added that the removal of some beach vegetation in recent years may have made the situation worse: “What we actually need is a positive conversation. We need to help engage the community in this so that they can assist…I think it is entirely possible to work with nature and maintain open sandier areas with an amenity focus.”

A call for Cllr Grey to hold a consultation with residents that would serve as a referendum on whether to have an amenity beach or allow the grass to grow was defeated by eight votes to six. Councillors instead voted 8-6 in favour of a counter-resolution backing the decision.